The dance of Osman Taka 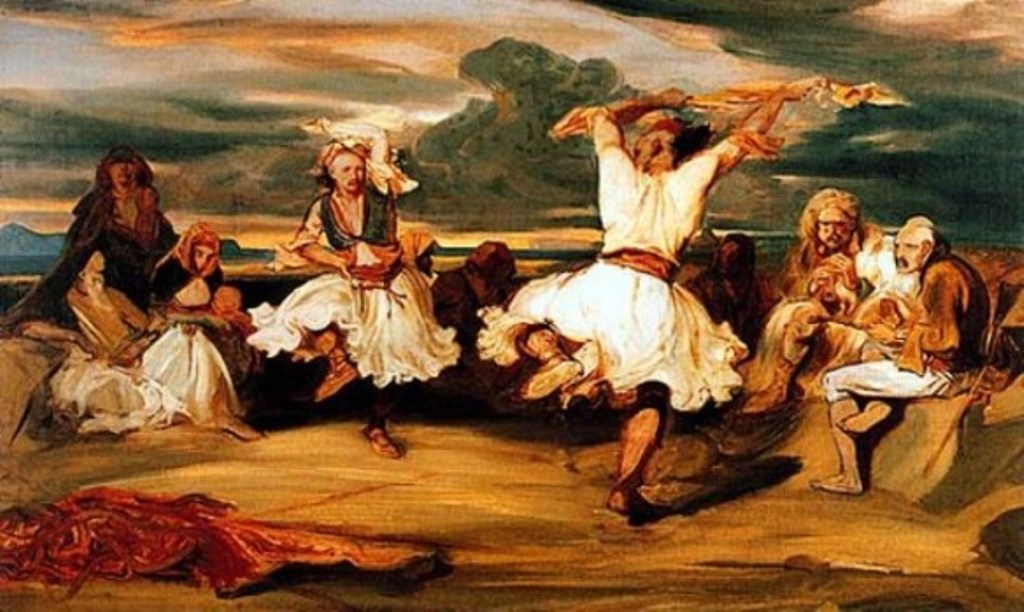 Any benevolent of Albanian art should know that they can not speak about the dance of Osman Taka, without knowing who was his own personality inextricably linked with this dance as nature with its creator. For this reason I feel obliged to write two lines for this great popular artist born in the heart of Chameria to be one of its most typical symbols.

Osman Taka was born in one of the most patriotic and richest families of Konispol around years 1848-1887. He, like some of the best boys of Chameria, grew and educated with the ideas of the National Renaissance. Over the years he became one of the most leading organizers of the revolts in the region of Chameria against Turkish invaders. Osman Taka has played an important role in the branch of the League of Prizren in Preveza. He managed to become one of the most important leaders in efforts for the protection of territorial entirety of Albania.

Osman Taka was not only an inexorable fighter but also a known popular dancer. Precisely to this fact relies also his deeds as one of the most prominent characters of popular Cham folklore.

It is said that Osman Taka was captured by Turkish forces, was incarcerated in Ioannina and sentenced to be hung to the trees of Konispol. At the moment when the decision would be executed, he expressed the last desire to dance a dance in front of  the rope. It seems as a legend but it is a true fact. And precisely right here emanate the history of the eternal artist Osman Taka.

-I want to dance a dance before the Turkish sultan’s governer! – Osman Taka said.

It is known that the desire of the sentenced person to death has been someday and is mandatory even in our days, that’s why they accepted this unusual request to the madcap Albanian Osman Taka.

They brought him a white kilt, fez and a comb to comb the hair and the black mustache and decked before starting the dance.

Of course, they brought him harmonica with clarionet, violin and tambourine, according to tradition, a group of musicians who knew how to beautifully play the Cham dances.

Osman Taka approached to the clarinettist and whispered the rhythm of a melody. The harmonist captured in a flash what he had to play.

Osman Taka asked to the executioners even a handkerchief and one of his friends, a dancer that would keep him during the dance. The sultan’s governor completed all the requirements, while waiting surprised what would happen. Nearby was his wife, his companion and surprised officials like him.

Finally Osman Taka, with handkerchief in hand and nearby one of his friends that tightly held him, was looking by the corner where the loop of the rope waved and started to sing improvising some verses for himself:

Osman Taka, dressed with the typical costume of Chameria, with white kilt and  fez, began dancing in front of the sultan’s governor of Ioannina and his wife. The drummer of the orchestra played the rhythm and the rare melody of his movements. He threw a few steps, sang and when he rotated he called “hopa” as to give courage to himself and to his friend who held him tightly following the very manly rhythm of the dance…

He was spinning in place on one leg in a space as a table and the when it seemed that he would cut off and fall down, suddenly threw upwards and the heels of the toe reached his friend’s shoulders that tightly held by hands.

He began the dance quietly, like the laid waves of the spring sea, being completely harmonized with the melody as lyrical, sad and hopeful that stemmed vibrating by the clarinet and violin. His simple steps, slow and cut, danced and danced, then suddenly took off and exploded in a dizzying and revolving flurry in a space as a baking pan. Just as a quick swirl which resembled to a wave that swollen as a magic and foam and turned onto a white crested wave. His hand, sometimes behind the head and sometimes as an eagle’s wing in flight, left the impression that he wasn’t dancing but was making waves. The kilt erupted and erupted and the fez seemed to tend towards the clouds. He danced like nobody else, not as a dancer, but as a rare magician or as a sylph coming out of the folk tales. Once as whirligig and once bended back with the head on earth, as a bridge, full of charm and elegance, sometimes as a newborn wave and sometimes as a gray- headed wave, seemed to be a part of nature, as the land and the sea, or like nature descend by that rotating and stunning beauty.

It is said that thanks to that body magic, skill and agility almost divine, the enchanted daughter of the sultan’s governor, almost fell from the window while extended to see that wonderful dancer.

All the people nearby looked him with admiration and amazement, forgetting that he was sentenced to death and a sworn enemy of the Ottoman Empire. When he finished the dance, Osman Taka, drowned in sweat, wiped his forehead with a handkerchief and immediately lifted the crowd with an eagle’s look.

The surprised dancer drank a pitcher of water and cried:

– Now I’m ready to go on the rope for fatherland! …

The sultan’s governer stood up and cried:

– A dancer like Osman Taka cannot ever go on the rope!

He immediately ordered the stopping of the execution and forgave his life. It is said that since that day, this early epirotic dance was called the dance of Osman Taka. It is an exceptional dance, the most beautiful and most manly of Chameria. A dance that brings to memory Osman Taka, the hero-boy, who immortalized in history and the deeds of the popular folklore thanks to his last desire to dance before the death. That was enough and Osman Taka, this living image of Albanian heroism during centuries, to triumph over death and to enter into song and legend.

The years passed, the drummer of Konispol played the music and the dance survived generation after generation embodied in dancers in love with the wonderful history, traditions and folklore of Chameria.

Many artists have danced over the years this dance, but nobody could dance it till nowadays like the artist boy Taip Madani, from the village Shala of Konispol. It is said that with his brilliant dance in the Folk Festival of Gjirokastra in October 1978, Taip Madani made the dance of Osman Taka one of the most beautiful dances and most evaluated of the modern times.

Through his virtuous dance, the artist of our time, Taip Madani, not only reinstated in the contemporary scenes the golden glow of this inaccessible dance, to the Cham dances in general and to itself impressive Cham folklore, but he re-created even the myth of the new Osman Taka, able to restore through centuries the unquestioned values of the artist-hero, the old Osman Taka who shines like a brilliant among the brilliant of the treasures of the Albanian folk culture.