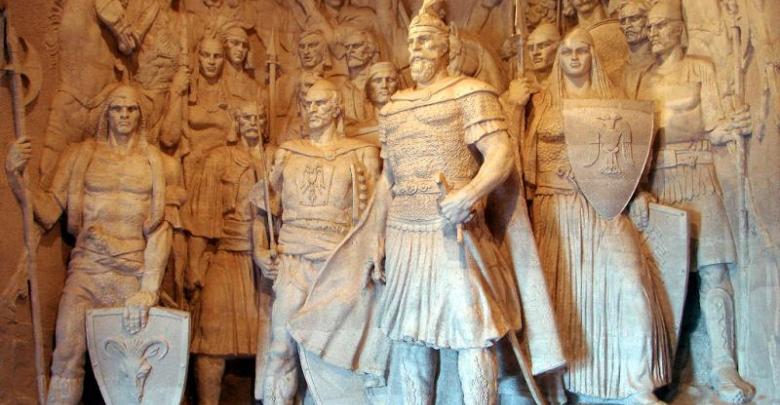 Arts in DMPP – Scanderbeg and his warriors

The beginnings of the figurative art in Albanian land are early. The first traces belong to Neolithic period. Through many archeological discoveries, in different areas of the country are found thousands of ceramics, terracotta, figures in metals, etc., which belong to Illyrian tribes, directly ancestors of today Albanians.

The early productions are simple, for practical usage but in them appear artistic values in the zoomorphic forms of the dishes and in their decorations, engravings and other elements as well. Since the 6th century up to 3rd century B.C in the ceramics are drawn lines and geometric figures; the form is built with elegance and is enriched with plastic elements. Many dishes of this period which today are preserved in Albanian museums have local genuine distinctive artistic values that are not present in the art of the other neighbors as ancient like Helens, Macedonians or Romans.

From those ancient dishes, adorned with decorations and plastic fractures, starts the street of sculpture in Albanian land being that way in fellowship with the art of the earliest nations of Europe. More clearly features appeared with the creation of Illyrian cities: Bylis, Amantia, Foinikue, Butrot and also with the placements in the cities: Durahu, Apolonia, Oriku. In Illyrian cities was further developed the round sculptures and also relieve which deals with the construction of monuments.

Apolonia and Durrahu that were the most important art’s centers during those years had its prominent craftsmen who chiseled and sculpted in a style with special features compared to those imported creations by the Hellenic and Roman civilization. In Apolloni and Durrah were produced many of the beautiful dishes and pots of the antic style which are preserved in our museums. The drawn figures represent different mythological scenes, views by the athletic races, fighting scenes, etc. The painting of the figures is on motion, full of harmony and plasticity. During this period were created also many small bronze statues and terracotta where were shown laic motives and children figures, shepherds, etc.

We face figures with artistic values also in the coins that were realized during this time in Apolloni, Durrah and Orik. The flowering of Illyrian cities brought a great development of art which was followed also with a variety of forms and techniques; from the frescoes till to beautiful monochrome and polychrome mosaics. In many artistic works it is seen the classic spirit which is supported in the centuries tradition. The main centers of the artistic creativity were Apollonia, Durrahu, Botroti etc.

During Roman invasion, we have the art of rural regions divided by the official art, where are reflected motives by the everyday life. With the presence of simple artistic elements which differ by the earlier creations, and with the sculpts of Illyrian clothing and names, the creativity of these 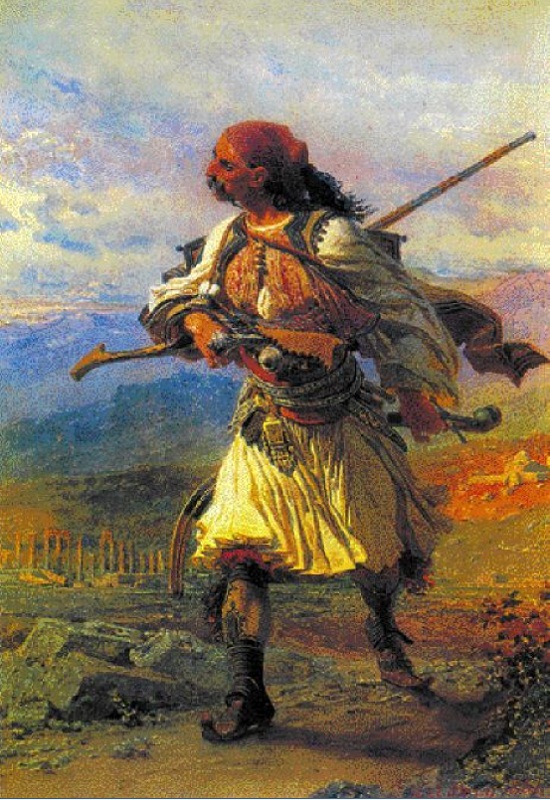 years may be considered as an attitude against the assimilation from the most powerful invaders of all times.

Albanian art has a long and eventful history. Albania, a country of southeastern Europe, has a unique culture from that of other European countries.  The Ottoman Empire ruled over Albania for nearly five centuries, which greatly affected the country’s artwork and artistic forms. After Albania’s joining with the Ottoman Empire in 1478, Ottoman influenced art forms such as mosaics and mural paintings became prevalent, and no real artistic change occurred until Albanian Liberation in 1912. It was not until Albania declared independence from the Ottoman Empire did radical artistic change occurred.

After Albanian liberation in 1912, Albanian art experienced a patriotic renaissance. Artwork that depicted the historical past reached its height in popularity. Likewise, the country’s continued cultural isolation from Western Europe led artists to focus more on national matters. Sculptures of national icons became popular throughout the country. In 1968, Sculptor Odhise Paskali (with help from fellow sculptors Andrea Mana and Janaq Paço) constructed a monument of Skanderbeg, Albania’s national hero, in honor of the 500th anniversary of his death, and it is placed in the center of the capital city of Tirana.

After World War II, a repressive communist government took rule over Albania, and the artwork that arrived during the communist era reflects the turmoil of the time. Art was censored greatly by the Albanian government and artists were urged to create works that endorsed socialism. During the 1950s and 1960s, the dominant theme of Albanian paintings was the “proletariat,” the backbone of the socialist system. Much of the country’s art focused on domestic scenes such as men working in the fields and women feeding chickens. Also, landscape scenes were highly popularized by Albanian painters. Painters Vangjush Mio and Fatmir Haxhiu are most famous for their respective landscape paintings.

Although Albania left communism for democracy in 1991, scholars currently label Albanian artwork under the category of “socialist realism”, for its emphasis on portraying real people and situations. Although much of Albanian artwork is influenced by impressionism and expressionism, it is the most realist in its depiction of everyday life. Contemporary Albanian artwork captures the struggle of everyday Albanians, however new artists are utilizing different artistic styles to convey this message. Albanian artists continue to move art forward, while their art still remains distinctively Albanian in content.