Richard Holbrooke turns the city of Fier into celebration

On Saturday, 4 July 2015, was the celebration of the Independence of the United States, which Albanians recall with high respect and gratitude for the valuable contribution that  USA has given to Albania, Kosovo and  Albanians wherever they are.

On Saturday, 4 July 2015, exactly on this significant day for the Americans, but also for the well-wishers of this great democratic nation, on the occasion of the anniversary of Independence of the US, Diplomatic Mission for Peace and Prosperity (DMPP), in close collaboration with the Municipality of Fier, Albania organized a very beautiful  ceremony in one of the centers of Fier, where they placed together the bust of the great American political and diplomatic personality – Richard Holbrooke.

Fier On Saturday, 4 July 2015 really turned into a very nice and exciting celebration, where music, song and group of dancers resounded as if they were flying, which created a very nice festive atmosphere.

The bust of the great diplomat Richard Holbrooke, stood proud, but covered, as if he wanted to say, “Unveil me when I hear the anthem of the USA”, states for which he worked very hard all his life.

The ceremony had many guests, who participated in the inauguration of the bust of Ambassador Holbrooke, with protagonists of the ceremony Dr. Shefki Hysa, Chairman of the Diplomatic Mission Peace and Prosperity (DMPP) and Mayor of Fier Dr. Baftjar Zeqaj, as well as the newly elected Mayor Armando Subashi, members of parliament, politicians, executives from Kosovo, representatives of the Albanian diaspora in the US, and many local authorities.

Initially the Albanian Flag anthem was respected and then the US national anthem, and after this moment, the beautiful bust of Ambassador Holbrooke realized artistically by the Albanian sculptor Idriz Balani, was unveiled and  inaugurated by Dr. Shefki Hysa and the Mayor Fier, Dr. Baftjar Zeqaj, a gesture that was applauded by all participants.

On this occasion many political speakers, member of parliaments and others held their speech. After several speeches, all participants were invited to a cocktail organized and sponsored by the well-known – Baftjar Zeqaj, Mayor  of Fier, a figure in the service of Fier community for many years. After the cocktail, many of the people present were invited for lunch.

I would like to emphasize that the celebrations and central personalities of the US, are celebrated and remembered more by the civil society, various organizations and personalities in collaboration such as this superb ceremony organized by Dr. Shefki Hysa and Bafjar Zeqaj, than by the Albanian state itself.

Humbling with respect and gratitude towards the figure of the outstanding diplomat -Richard Holbrooke, we congratulate and rejoice that such ceremonial events for senior representatives of the US, will be organized even more, expressing respect and gratitude for what America has done for Albanians wherever they are. It is America, the country which has contributed the maximum and has vetoed historically the existence of Albania in 1912, when the old Europe was partitioning the Albanian lands, it is America which vetoed in 1999 in the liberation of Kosovo, expressing respect, appreciation, gratitude and love to those who defended us and helped us everywhere for peace and prosperity, we have to give these US great personalities – a big thanks. 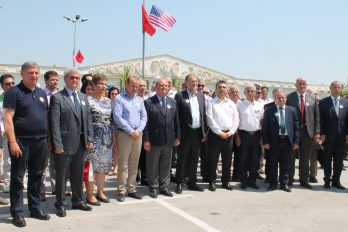 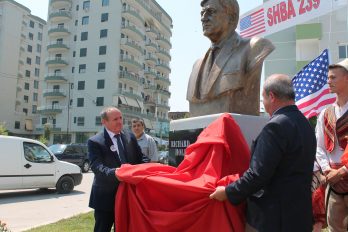