Hajji Selim Muça, the Muslim leader who conveys the peace of God 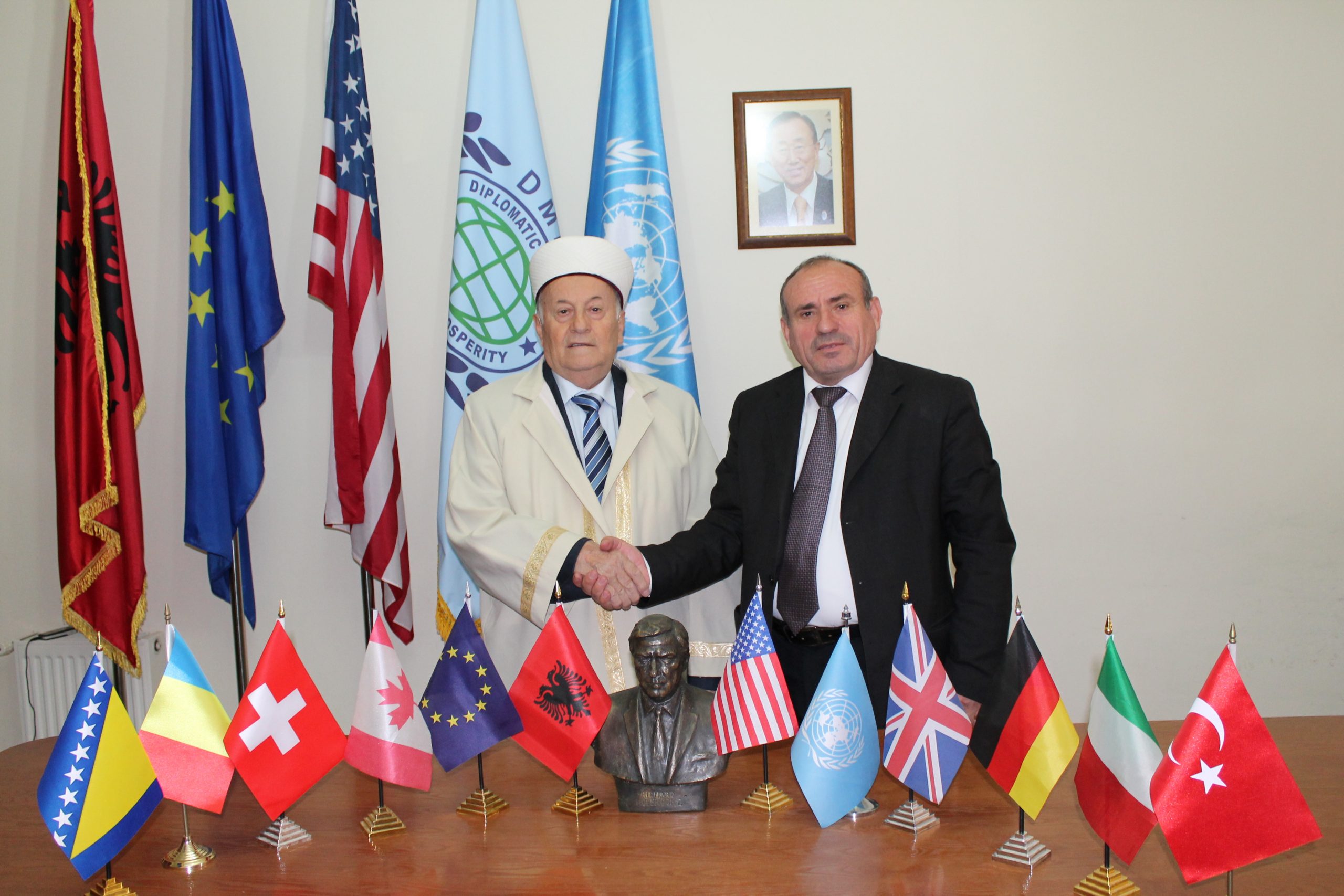 Hajji Selim Muca comes from a family with Islamic traditions. His father was Imam until he passed away in his native village. Since the beginning of democratic processes, he has been totally engaged in serving to Islam and rebuilding the institution of the Muslim Community of Albania.

He has a rich background in his work experience. From 1964 to 1991 he worked in the Geological enterprise in Bulqize, Diber, as an Engineer of Geodesy -cartography- topography. During 1992-1994 he worked as Inspector of Education in the Muslim community. In 1994 he worked as Mufti of Elbasan for four months. During 1994-1995 worked in the muftiate of Lezha and Vlora. From March 1995 until 2004 he worked as chief of staff in the Albanian Muslim Community. In March 2004 he was elected as chairman of the Muslim Community of Albania.

Hajji Selim Muca during the time he carried the post of the chairman of MCA, has been a new vision for the Albanian Islam. Thus the highest institution of Albanian Muslims has been run by Haji Selim Muca since five years.

As one of the most prominent figures of Islam in Albania, Selim Muca was elected in the meeting held on March 17, 2004. This meeting would give answers to a number of important issues, among which was the choice of the head of the Muslim Community, which had not been achieved in the previous meeting on 3 December 2003.

Hajji Selim Muca was the second leader of Albanian Muslims in the democracy time, replacing in this post Hajji Hafiz Sabri Koci. He leaded the community at a time when a number of important issues required solution, such as the new vision and one of the most perceptive issues, that of property restitution, an issue often discussed and sometimes misinterpreted not only by the media, but also by certain individuals. The proper administration of the property of MCA would affect the self-administration of the Muslim Community, which would avoid his financial dependence from external resources.

Hajji Selim Muca has also influenced in the specialization of MCA framework and replacing it with a new framework, through updating the most important positions in all the headship and all muftiates in the entire country. Some of the members of the headship run by him now carry scientific degrees, thanks to the scholarships that have been provided in the agreements with the Muslim community.

Selim Muca, as the new head of Albanian Muslims, having completed the theological and secular education, has brought along with him an extensive biography. He has finished the madrasa school in Tirana and the general high school in the capital city. Afterwards Hajji Selim Muca continued his graduate studies in the Engineering Geodesy-Cartography  branch in the Czech Republic. So he has very good knowledge in Czech language. In the early 90’s, he took an active part in revitalizing the structures of Islam in Albania with devotion and dedication and played an important role in the work of the Albanian Muslim Community, performing several tasks.

Hajji Selim Muca has been identified as one of the suitable names for the post of the chairman of the Muslim Community, for the spirit of cooperation, understanding, seriousness and comprehensive ideas that characterize him. This became clear in his election in 2004 by the General Council of MCA, where Hajji Selim Muca received 78 percent of the votes of the members present.

In the focus of the priorities and activities of Selim Muca, a special attention has been given to the issue on building the central mosque in Tirana. He has undertaken considerable commitment and efforts, both through negotiations on the pursuit of documentary procedures, and through official correspondence with the State Committee on Cults, the Municipality of Tirana, Prime-Ministry and NCTAA (National Council of Territorial Adjustment of Albania).

It should be noted that among the priorities of  Selim Muca, a special attention is paid to the treatment of the issue of recognition, restitution and compensation of the temple.

This issue has been addressed with priority. Considerable funds have been designated for the provision of documentation, preparation of files and opening of proceedings for special occasions. Thus the identification of properties has reached up to 90 percent. Under the direction of Selim Muca, over 1,000 real estate documents have been extracted from the archive. During his 5-years term as chairman, about 550 mosques have also submitted their documentation for legalization.

In compliance with the statutory duties, Selim Muca has performed at a high procedural and protocol level all meetings with state leaders, ministers, diplomats, foreign delegations, etc., and has performed all international meetings, according to the invitations received by MCA. It is worth mentioning here the meetings with Western mass media for which he gave interviews from various countries of the world. He has also prepared short and long term projects for sponsorship by the governments of Malaysia, Saudi Arabia, Turkey, etc., in various fields.

He has also directed many inter-institutional activities of MCA, of which we can mention the conduct of a series of meetings at high level executives in conferences and seminars organized by local and foreign institutions. It was of special importance the development of the  diplomatic institutional activity of the Muslim Community of Albania, in support of the independence of Kosovo through meetings with ambassadors of the diplomatic corps accredited in our country, as well as the preparation of statements addressed to international bodies such as the United Nations Organization, the Organization of the Islamic Countries Conference, etc.

In terms of religious activities during these years, above all it is mostly esteemed the magnificent organization of international level, the festive program, developed at the Palace of Congresses on the occasion of the commemoration of the birthday of Prophet Muhammad (a.s.). In addition to the diplomatic corps and eminent personalities of the Albanian government, in this majestic program, the President and Prime Minister of Albania have expressed their congratulations to the Muslim community for organizing such contemporary events and for the beautiful image that this community gives to the country. During the tenure of Chairman Selim Muca, the publishing council has realized for the first time some real research publications, which were put in assistance of the religious frameworks in muftiates, madrasa and beyond, being registered for the first time in the National Library by the respective ISBN on behalf of the Muslim Community. These works have also been presented in the Book Fair in 2008, where for the first time MCA was present with a variety of articles.

One of the main strategies of the Chairman Hajji Selim Muca has also been the establishment of the education system and the increase of the education level in madrasa, beyond the standards of our country. During these important years there were organized many national activities such as the Holy Quran competition internationally, etc. During these school years there have been major investments in madrasa respectively in Tirana, Shkodra, Kavaja, Cerrik and Korca Complex, which all together reach the amount of millions of Euros in funding, thanks to the agreements that MCA, led by Hajji Selim Muca, has signed with several associations of international level.

Hajji Selim Muca has been re-elected chairman of the Muslim Community of Albania after the voting held on March 21, 2009. He received 85 percent of votes from the 88 members of the General Council of the MCA.

Hajji Selim Muca resigned from his post on 8 March 2014, after reaching the age of retirement.

He and his work over the years have been highly appreciated by national and international institutions. Because of his rare values as a personality in the service of social community peace in Albania, Hajji Selim Muca was honored by the International Organization Diplomatic Mission Peace and Prosperity with the highest title Peace Missionary – Honorary Ambassador. 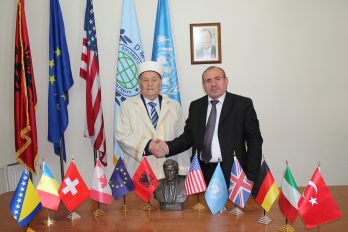 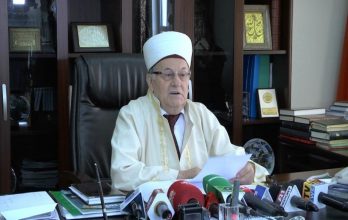 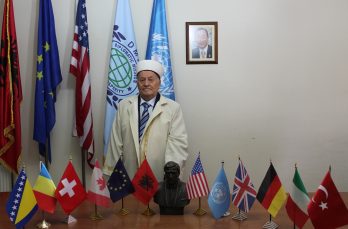 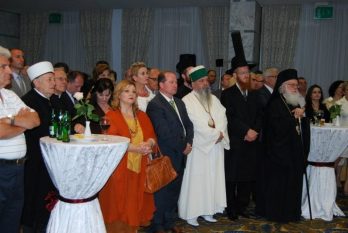 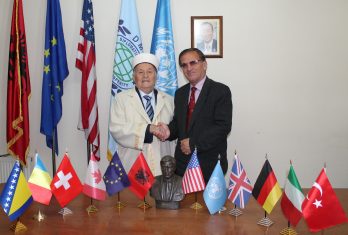