Being a “Missionary of Peace” 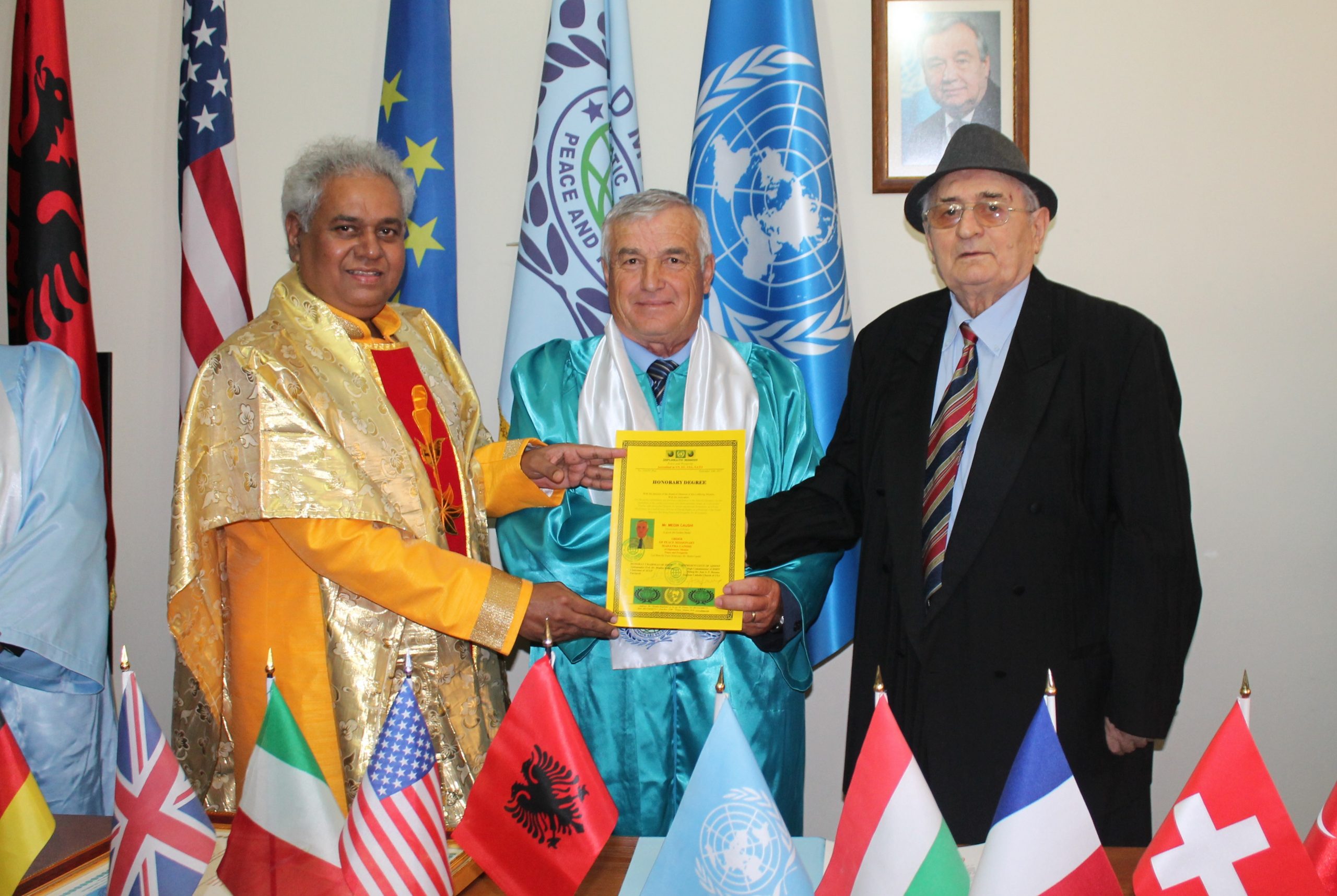 The man feels complete, even surprised when he sees that next to him stand personalities who came especially from afar to honor, to appreciate with orders and medals two simple people, two people who until a few moments ago were just friends, only friends of the heart. In a beautifully organized ceremony with the seriousness deserved by the Diplomatic Mission for Peace and Prosperity (DMPP), based in Tirana, which is led by Dr. Shefki Hysa, Two people from Tepelena were awarded high titles. The Gold Medal “Order of the Missionary of Peace Saint Mother Teresa”, awarded to the unforgettable Selfo Dosti (after death) and the Gold Medal “Order of the Missionary of Peace Mahatma Gandhi” awarded to teacher Medin Caushi, on behalf of the Academy of Universal Global Peace AUGP), American Diplomatic Mission for World Peace (ADMËP) and Diplomatic Mission Peace and Prosperity (DMPP), handed over to Dr. Mahatma Gandhi, who was the first of the “Power of the soul or the power of truth” movement? Difficult question, he said, but I solved it for myself, saying that it is “What the inner voice says”. And I ask: what does my heart tell me about …

Often we forget that we belong to each other. We also forget the ancient teaching that hatred cannot remove hatred, but only love can do it. Selfo Dosti, the intellectual from Tepelena was and remained as long as he was alive only in the service of ordinary people, of those people who needed to be shown the path of knowledge and exaltation to be masters of themselves. Nothing saddened him more than the hardness of the hearts of the people in power, of the educated people who did not pave the way for the education of all, the poor and the rich. He, according to those who have worked and lived with him, was magical, had the ability to convey to ordinary people, without support, the feeling of optimism to get the right direction in life. And do you know why? Because he adhered to the saying heard by wise men: Man does not know what he is capable of doing until the moment he is asked. There are today many cadres and specialists, many prominent personalities of culture and science, who have taken the “first step” in the path of education, of preparation to become valuable for themselves and society, in this person, in whose conscience boiled the courage of the intelligent man. “Reading the biography of Selfo Dost, writes in the greeting Dr. Jose, Consul General – ADMWP, and Dr. Shefki Hysa, director of the Diplomatic Mission for Peace and Prosperity, headed by his brother, the well-known actor Barjam Dosti, whoever feels inspired by his activity as a model official and as a social leader, a worthy representative of the Albanian community of Tepelena where he was born, was increases and develops the best activity of his political life ”. I saw Selfos’s brother, Barjam, play the role of a confused man in the theater. I was amazed to hear what he chose to say about his immortal brother, in whose memory the parable of Gandhi, Martin Luther King, Mandela and Saint Teresa, the ideological and inspiring figures of Modern World Peace, is clearly reflected. . It was a significant moment when in the environment where the ceremony took place one of the participants, the writer Jovan Jano donated to Dr. Madhu Krishan, president of the World Peace Academy, two books dedicated to Gandhi and Martin Luther King. Albanians, according to Dr. Madhu Krishan, are in love with these prominent figures of humanity …

To honor and respect the past, to follow in the footsteps of the ancients, taking them much higher to what they have done for the country and the community where they grew up, is something divine. Medin Çaushi, a hard-working teacher from Levan, Tepelena, I must say is somewhat divine. I do not know why. Probably because of his intelligence and his noble spirit from the cradle, he was just born. Medina has its roots in the Bektashi faith. But what makes me think is another somewhat mystical fact: he bears the name of father Medin Glava. Because Baba Medina is his great-grandfather, he is one of those foundations. Teacher Medina, that is, this Young Man, has walked that path, with that strength of faith. Even on the day he received the Gold Medal “Order of the Missionary of Peace Mahatma Gandhi”, it immediately occurred to me that a “Gold Medal” was awarded to Father Medin Gllava with the motivation “Faith and Unity for the salvation of the Homeland” by Prince Vidi. These two events are fixed by a century …

“… Honors the leaders of the tribe

These are the two lines of the lyrics of the song, which were sung by the participants in this event for their already decorated teacher, Medin Caushi. The participants were all “hand-picked”. There we had lawyers Fredi Progonati and Bedri Qorri, Prof. Dr. Fatmira Rama, Prof. Dr. Shyqyri Hysi, leader and elected in the region and in the municipality, Sulo Muçobega, do the poetic verses come from the heart, to sing them and to make them part of such a significant ceremony?

“… For Selfo and for Medina

All missionaries of peace

This impressive ceremony was attended by ordinary people, from those “personalities” to do for themselves, who rejoice and be happy like those who received high praise. There I saw Naim Dëra, who grew up manly on the common ground that gave birth to and raised Selfon and Medina. At a climax, at the moment when the Speaker of the Albanian Parliament, Mr. Gramoz Ruçi, handed over the “Gold Medal” to Selfo Dosti’s brother, Barjami, he did not hesitate to say solemnly that all participants, without exception, were in some way peace missionaries, citizens who contributed daily to bring friendship, love, peaceful environment between people. Because, according to him, the best way to find yourself is to lose yourself in the service of others, which rarely happens in the politics of the day. Seeing and contemplating the presence of some personalities of the stage and the screen, friends of the Dosti family, excited for such meaningful assessments for contributions only to people, the question that will be answered on the spot immediately arises: Can they not be Missionaries of Peace artists so dear to the people as “People’s Artist” Luftar Paja, “Merited Artist” Prof. Dr. Birçe Hasko, prominent actor Ilir Bezhani, etc.? To go home and love family, said Mahatma Gandhi. And they, all of them, went to their homes, near the families, to promote the hour and instant of peace. If we want to teach true peace in this world and if we are truly against war, we must begin this lesson in children, having been a message from Mahatma Gandhi. 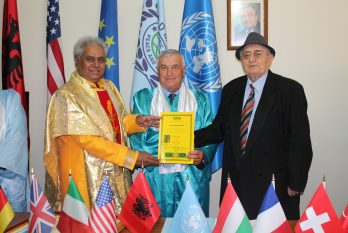 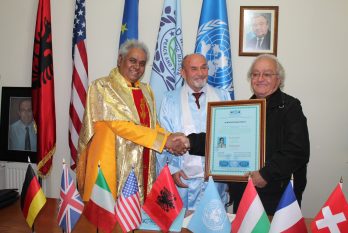 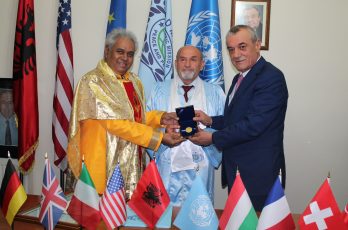 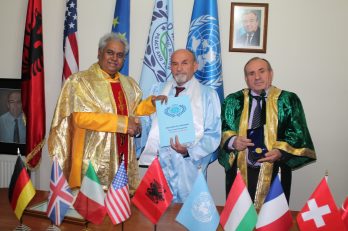